The World of CD-i Chronicle #2

Hey guys, this is Omegalfa from The World of CD-i for the 2nd Chronicle!

Now that we have a better knowledge to choose a CD-i player, let’s get a good controller!
You have for sure heard about the remote controllers that comes with a CD-i player:

“Very difficult to play with!”
“Who is the crazy guy who designed this?”
“It is supposed to play games with this?”

In fact, the remote controllers that came with a CD-i player was a little bit difficult to use for gaming, but keep in mind a very important thing, the CD-i wasn’t supposed to be a gaming console but a familial system, where you could watch a movie, check an encyclopaedia, listen music, play games and I pass many other possibilities…
So the main objective of the remote control was to simply move the cursor and click using a button.

Under the 1st Shell version, the remote control provided with the system was the Thumbstick, the 22ER9051, a wireless remote.
Then with the release of the 2dn Shell, a smaller remote control was provided, called the CD-i Commander, the 22ER9055, also wireless.
This 22ER9055 is sensible to the pressure of the finger and will accelerate or slow the cursor depending of your touch sensibility.
A 3rd remote controller, this time wired, comes with the CD-i 450, I am talking about the 22ER9019. This CD-i player, for being a  low cost model, isn’t equipped with any IR sensor. If for any reason you really want to use a CD-i Commander, you will need to by an external IR receptor 22ER9054, that also include the remote control. 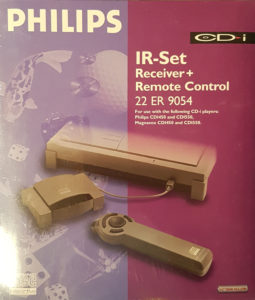 Both are designed for left-handed and right-handed people and only had button #1 and button #2 defined by one dot and two dots. 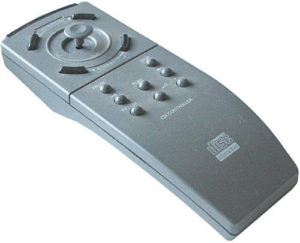 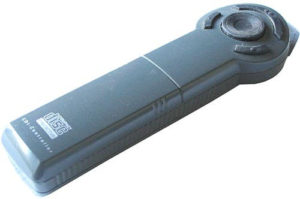 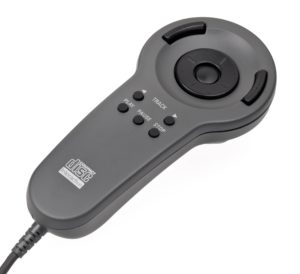 But for a better gaming experience, I am going to show you some of the main control!
Please follow me!

PRECISE DEVICES:
For some games you will need a precise pointing device. When I say precise, I mean quiz games, with need to answer fast with a quick movement. For those you can choose a Mouse 22ER9011, available in 2 colours, white and grey. The Trackerball 22ER9013 is also good for this kind of games. 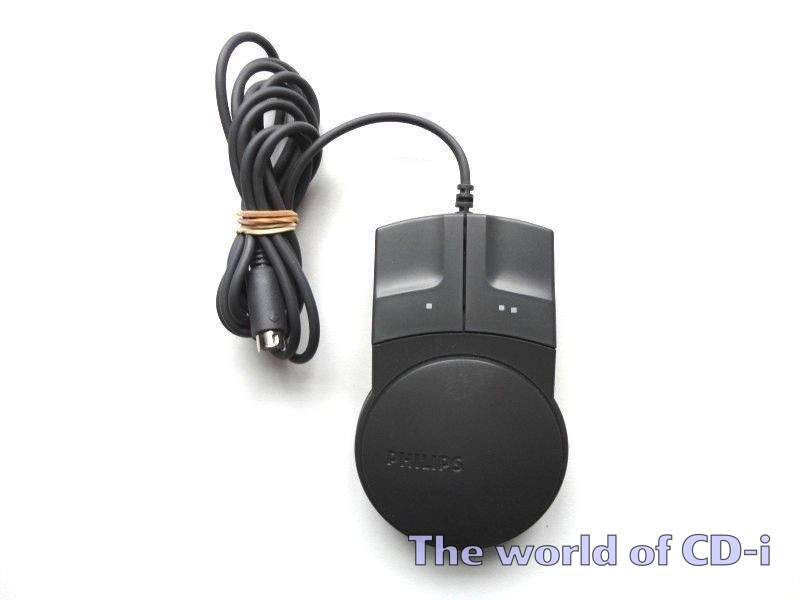 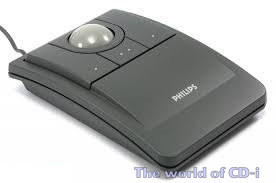 Only later Philips decided to add one more button, nothing more than the combination of button #1 + button #2, resulting with button #3. The appearing of this 3rd button was mainly due to developers demand, to get more possibilities of actions during the gameplay.
A good example of games using only 2 buttons for the fact it was developed before this addition is Zelda™ – The Wand of Gamelon and Link™ – The Faces of Evil, the infamous titles. I really don’t know why by the way, but I will touch this subject in another Chronicle.
This is why the remote controllers only have 2 buttons. 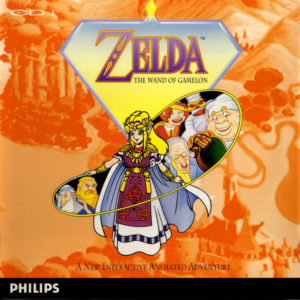 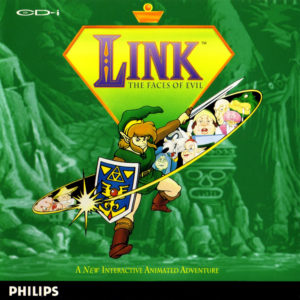 ARCADE GAMES:
The next controllers we are going to see have this 3rd button on it.
The first one is a Touchpad, the 22ER9017, where a stick can be tangled for a different approach of movement. Based on the Gravis Ultrapad and built by Logitech.
4 buttons for this one, 2 times button #1, 1 time button #2 and 1 time button #3.
A speed selector is available in the bottom front side. Normal speed and double speed.
This speed selector will only boost the cursor.
This Touchpad also have an amazing feature, it is possible to be used by left handed persons. A selector is available in the top front side. After activated it, just turn the controller upside down and all the controls will shift.

The second is a Gamepad, the 22ER9021, also built by Logitech, it have 3 buttons, button #1, Button #2 and button #3.
A speed selector is also available in the bottom front side, with the same effect as for the touchpad. 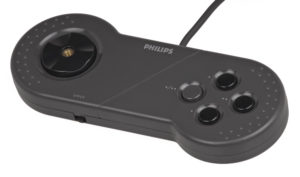 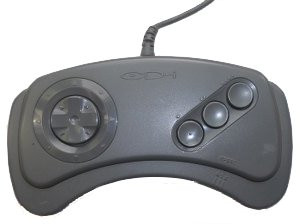 A non Philips branded is really recommended. It is for me the best gamepad for hardcore gamers!
The Gamester LMP, is a wonderful controller making use remind the SEGA Mega Drive gamepad.
4 buttons are available:
Button #1, #2 and #3 (also called A, B and C buttons) in the right side, and a #3 button at the place of a usual start button.
Also many extra options available in the top front side:
– Speed control:
Normal, double speed and triple speed.
– Independent settings of all 4 buttons as:
Normal, turbo and automatic. 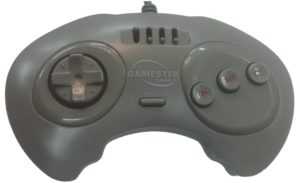 SHOOTING GAMES:
For shooting games you will definitely need to use the Peacekeeper Gun, the 22ER9020.
It is very hard to play any shooting game without this gun. It was sold separately and also as bundle with Mad Dog McCree™, a full motion shooting game. Shooting games can also become easier to played using a mouse.
Playing those kind of games using a remote controller is an insane but not impossible mission!
The Peacekeeper Gun uses an Infra Red (IR) receptor placed in the top or in the bottom of the TV screen, 2 wires are connected into the IR receptor. One go to the Input 1 of the CD-i player, the second is connected to the gun.
All shooting games, when using a gun, have a calibration menu that will define your position and the screen limits.
At the left side of the gun you will find 2 buttons: Stop (to disconnect / reconnect the gun) and button #2. Button #1 is the trigger. 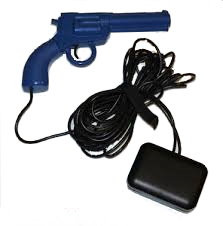 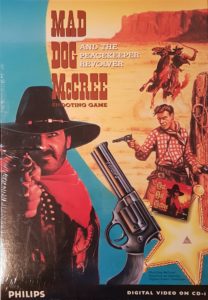 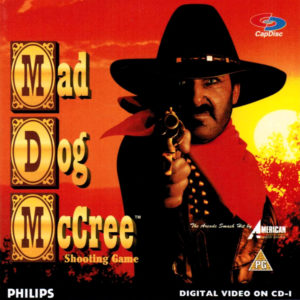 To conclude the gaming controllers subject, I can’t forget the children, as I have a little girl who love to play CD-i colouring and drawing titles, the Roller Controller 22ER9012 is definitely the best choice!
A big blue 360º free rolling ball will control the cursor, and 2 big round red buttons placed at the left and right of the roller will control button #1 and #2. The Yellow part isn’t a button at all, it is just for decoration.
This is an controller has been developed by Philips Interactive Media of American (PIMA) and Children’s Television Workshop (CTW). The objective was to improve and facilitate children playing educational titles. 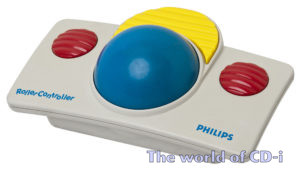 PRICES:
The prices of a Touchpad and a Gamepad are relatively expensive, you can count on 60€ to 75€ for each.
The Gamester LMP is very rare to find and is more expensive.
The Peacekeeper Gun very spread, so the price is low.
The Mouse and Trackerball are more rare than a gun, so a little bit less expensive than a Touchpad and Gamepad

The most important controllers for gamers have been visited and you can now make a more accurate choice before your next buy.
Hoping to see you next week for more CD-i Chronicles!

Find this chronicle with all the pictures right here:
https://www.theworldofcdi.com/console-purist-chronicles/find-the-best-cd-i-controller

Join us on our forum to talk about this subject! 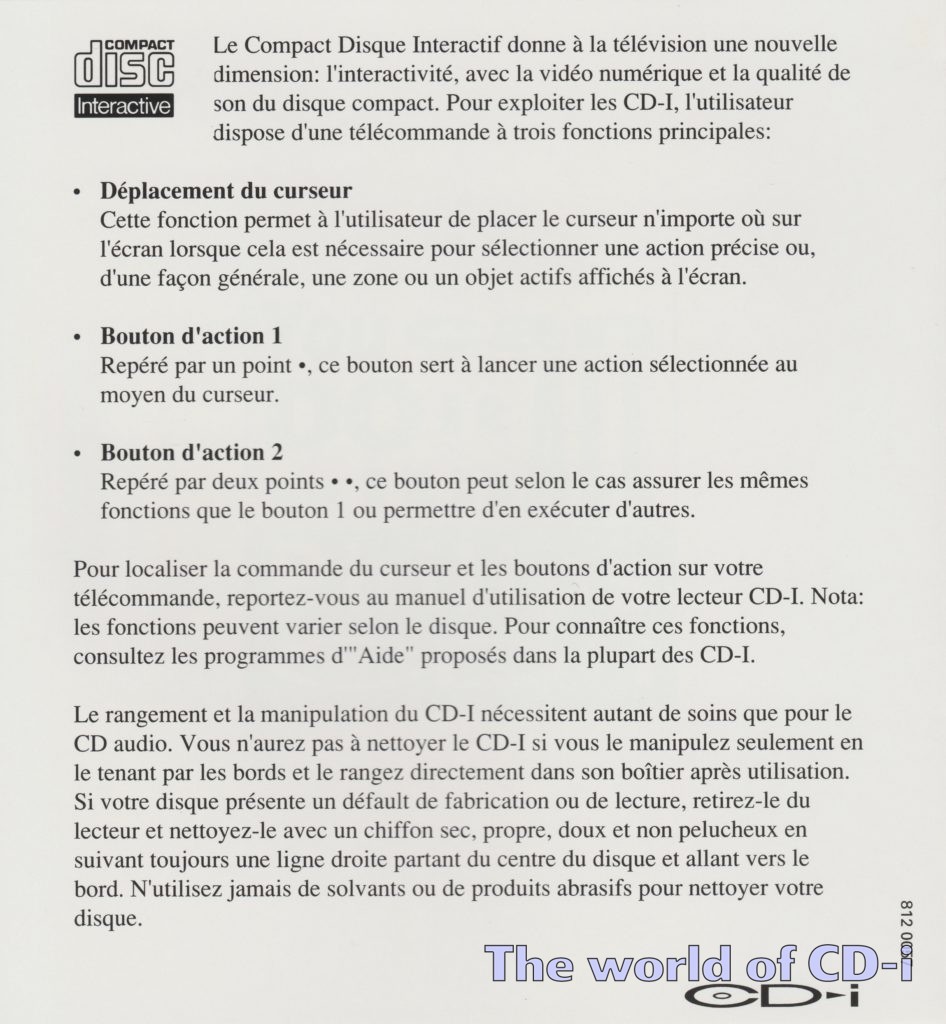